–The Buffalo Bills announced yesterday they are partnering with M&T Bank for the  sixth annual M&T Bank Draft Day Challenge—a contest where fans predict the Bills first selection of the NFL Draft.

Fans who correctly guess the Bills first NFL Draft pick will be entered to win a prize package. Fans can visit www.facebook.com/mybillscard through April 26 to make their prediction. Five winners selected at random will receive:

QUOTE OF THE DAY
NFL Network analyst and former NFL GM Charley Casserly
On the impact DE Mario Williams will have on the defense:
“First of all you’ll get great effort. You’ll get 100-percent out of him. That isn’t going to be an issue,” Casserly told Buffalobills.com. “Teams are going to build their offensive blocking schemes around him so that should free up opportunities for other players. I think he’s going to play hard and he can play the run well, which was a major problem with the Bills, stopping people running the football. They’ve got to stop the run.” 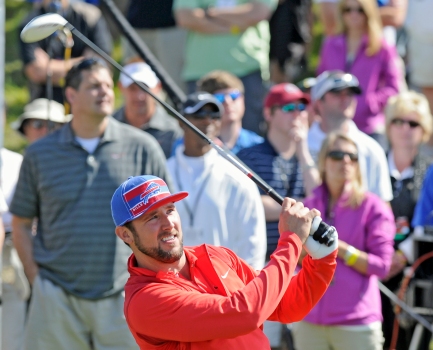 WIVB
Should the Ralph be moved downtown?
Should the Bills play in the city?
Viewers have lots to say on Bills move
Arthur Moats hosts Winging It!

WKBW
Plans for a New Stadium in Downtown Buffalo Emerge

Additional Clips
Inside the Bills Blog
Casserly on Mario impact